Over the next three minutes, I will show you exactly why you should sign up for the Make More Offers Challenge with Myron Golden and his team over at Golden Enterprises.

The Make More Offers Challenge was eye-opening. Myron laid out the business blueprints, the best business strategies, and how to operate at a higher level. This is the absolute best course challenge I’ve ever done. – Robbie Woelkers

Hi, my name is Dr. Robbie Woelkers. I’m a physical therapy practice owner and online coach, soon to be former. I’m actually in the process of selling my practice and my online coaching business. That is because inside of my practice, I felt stuck. Even though we were growing and expanding and adding more clinics and stuff like that, my profit margins, salary, and distributions weren’t going anywhere.

I didn’t know why. I just felt that we’re just in a system where reimbursement and salaries, I wasn’t in control of some of that stuff. The salaries would go up. The rent would be going up. Our reimbursement would be going down. We just had 23% cuts with a particular insurance carrier this year. It’s out of our control. We didn’t own, and we didn’t control a lot of the stuff, so I felt frustrated.

Then, with the online coaching, I realized that the way that we were set up and structured– I had nine partners, so it’s tough to split a dollar nine different ways– and if we weren’t operating at a specific value point, that’s why it was just really tough to get traction with that. 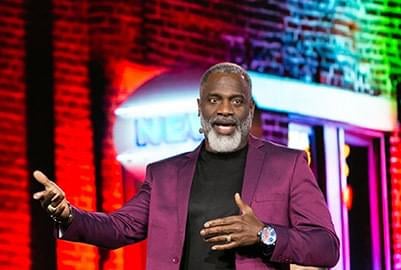 The Levels of Value

Myron showed us a couple of different things. Three things in particular that stood out to me were. First, he did the levels of value and where you should be operating. Once he started to speak about it, I realized that he said that most owners, myself included, were stuck in level one or two. Level one’s implementation is if I was a physical therapist treating patients.

Level two is being an owner or management, where you’re operating at a level where you’re teaching other therapists how to treat and do this stuff, and you run the day-to-day. Eventually, I would get pulled back into treatment. There were a lot of issues there versus operating at the higher levels, where you could start growing and scaling pretty quickly and working with more people at a high premium price. That was eye-opening to me.

Next, he laid out the business blueprints, like the best business strategies, actually how to operate at a level that– I was running in the wrong environment. No matter how much work I did, I wouldn’t have been able to go anywhere because I wasn’t in the right environment. So now he showed us what precisely that environment looks like. It’s so crystal clear right now, it’s incredible, and that was cool.

They also showed us how to find the people in that environment and how to put the message that they need to hear to get more sales. That, the right message to the right market, was huge. Finally, something that Myron did, other than completely changing your whole ideology and self-beliefs and stuff like that, is complete internal transformation.

One of the excellent parts, too, is he walked us through his exact sales process. There isn’t even selling. He just puts out the material there. Then people raise their hands. They already are committed three days before he even makes a sale. It was fantastic to see the process that he goes through. It’s not even selling. It just puts it in the position that people are asking to join your program without really not even know the price. I thought that was priceless.

Getting Past the Cost of the Challenge

The cost of this challenge, guys, is you can’t afford to do this challenge. I can’t be any more clear than that. The problem you’ll run into is that sometimes you don’t know what’s on the other side, so you don’t do anything. If you had stock and you’re like, “Oh, I should buy that stock when it’s cheap,” you’re like, “I don’t know if it’s going to go up,” you don’t trust yourself that you’re picking the right stock, so you don’t take the initiative to join. Then suddenly, it shoots up, and then you’re like, “Oh, I should have done that.” It happens time and time again.

I permit you to join this challenge and become the best version of yourself from a business standpoint. I am without a doubt that Myron’s going to be able to get you guys there because he will change your mindset. He will explain exactly why you feel stuck and show you exactly where you need to get to take your business to the next level.

I know I spoke for more than I wanted to on this testimonial here. I wouldn’t say I like to watch too many long testimonials, but without a doubt, guys, this is the absolute best course challenge I’ve ever done. With that being said, I can’t wait to work with Myron further in the future here.

Learn more about the Make More Offers Challenge with Myron Golden. Participants can choose two levels for the challenge. The VIP admission includes additional session with Myron before the daily training and the chance to get answers directly from Myron.

The next challenge begins May 16th – May 20th.
Learn more about the challenge here.